We are looking at the long /oo/ sound again today, but this time it is spelt 'u-e'.

Have a go at reading these words to start with... 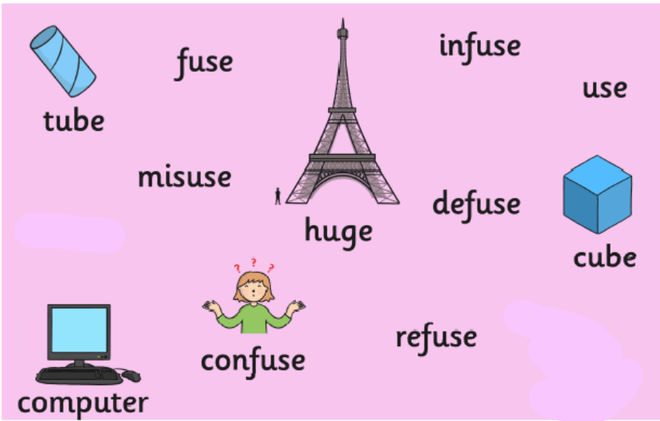 Now write as many of these words as you can into a sentence.

Have a look at the real and alien words below. Sound them out and blend the sounds together. Write the words onto a piece of paper and pop them into a hat. Now, choose 5 words and write them down on your own piece of paper. Take turns to pick the words out of the hat and, if your word gets drawn, you can cross it out on your piece of paper. The first person whose words are all drawn from the hat first is the winner! 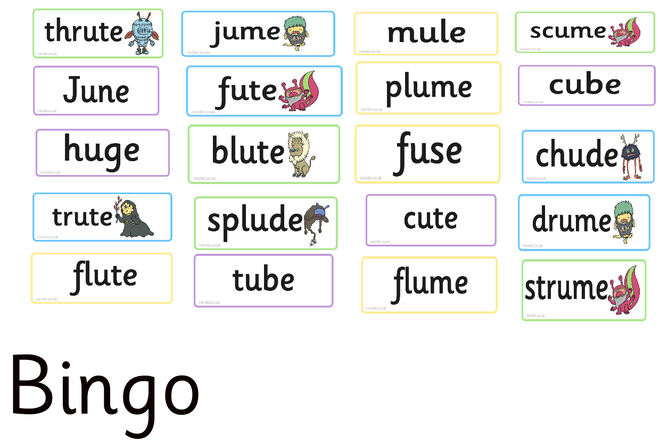 Start today by looking at the fact files below on the 'Tower of London' and the 'London Eye'. What features can you spot in this text type? Some of these are quite similar to those that we would see in a non-fiction book.

Can you point out...

You could label these features with a sticky note and send us a photo of this on Seesaw if you like.

We would like you to use the information from your research yesterday to create a fact file sheet for one or two crops. (Please challenge yourself with at least two if you are a more confident writer.) These will be great for the pirate farm crew as they love reading fact files but find books a little tricky to handle.

Remember to include the features that you saw in the fact files above to be really successful: heading, sub-heading, facts, photographs (or pictures), captions and labels. Can you also use a 'Did you know?' box in order to explain a fact?

Please remember to post a copy of your fact file on Seesaw so that we can check out all of your amazing crop facts and show them to the pirate farm crew. 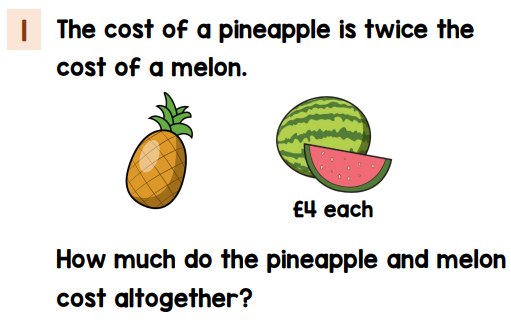 Today we are learning to recognise the value of different coins.

Recap the names of the coins from yesterday. Revisit their properties and how we can tell the difference.

Show the children the below one penny, two pence, five pence, and ten pence coins.

Point to each one and ask children to repeat the coin names again.

Explain that we can use pennies to pay for items and the coins represent different amounts of pennies. Discuss the value of each coin.

Start with a penny coin. Explain that it is worth one penny. Show one using your Dienes. Ask : How many penny coins have the same value as a two pence coin? Ask: How many penny coins have the same value as a five pence coin? Ask: How many penny coins have the same value as a ten pence coin? Explain that the symbol for pence is p.

Now, have a go a answering 'thumbs up' or 'thumbs down' for these questions. Have a look again at the below coins.

Ask: Which coin has the greatest value? How do you know?

Which coin has the least value? How do you know?

Refer to the amounts using Dienes. Give children a chance to order the coins from greatest to least value and vice versa.

Have a look as these ten penny coins in a row. Count in ones to demonstrate that there is ten pence altogether. Organise the penny coins into groups of two. Exchange each pair of pennies for a two pence coin. Count in twos to demonstrate that there is still ten pence altogether.

Now organise pennies into groups of 5. Exchange each set of five pennies for a five pence coin. Count in fives to demonstrate that there is still ten pence altogether.

Now organise the penny coins into one group of ten. Exchange the ten penny coins for a ten pence coin.

Now, have a go at the below worksheets which ask you to say how much money is in each jar. If you are able to exchange the pennies for a single coin of the same value, like in the above examples, draw it in the answer box!
Have a go at dancing along to Supermovers too!
Top

A 'sessionid' token is required for logging in to the website and we also use a 'crfstoken' token to prevent cross site request forgery.