Revise the below sounds by reading them aloud to an adult. Can you think of words that contain these sounds? 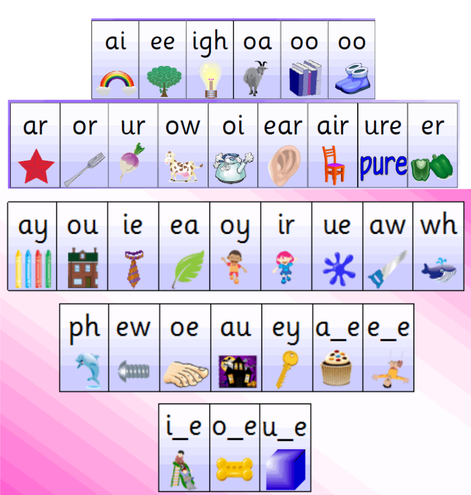 Now, have a look at the activity below. How many new alien words can you make by joining two halves of the word together? 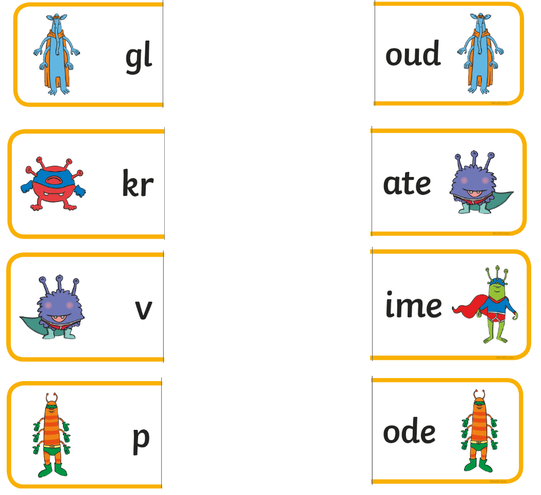 Mrs Daines has a very important job for you all today! Because the school has been closed to most children for a long time, she really hasn't been able to show the new Early Years children for next year around with their parents. They literally have no idea how fabulous our school is and they haven't managed to see all of the great facilities that we have at Tyrrells School either.

This is where you can really help Mrs Daines by impressing the new parents with your sensational Year One writing skills! She would like you to design a leaflet to persuade parents to send their children to Tyrrells. It should include some of the command type persuasive sentences that we saw in the leaflets yesterday, which will make people want to send their children to our school , as well as adjectives and other non-fiction features like headings, sub-headings and captions with photos.

Today you are going to do some research for your leaflet. Normally we would go and explore and take some notes, but as this is not possible at the moment, we have managed to do some secret undercover filming of a few areas of the school - as you watch these short videos, jot down some adjectives that would be brilliant to describe these places. 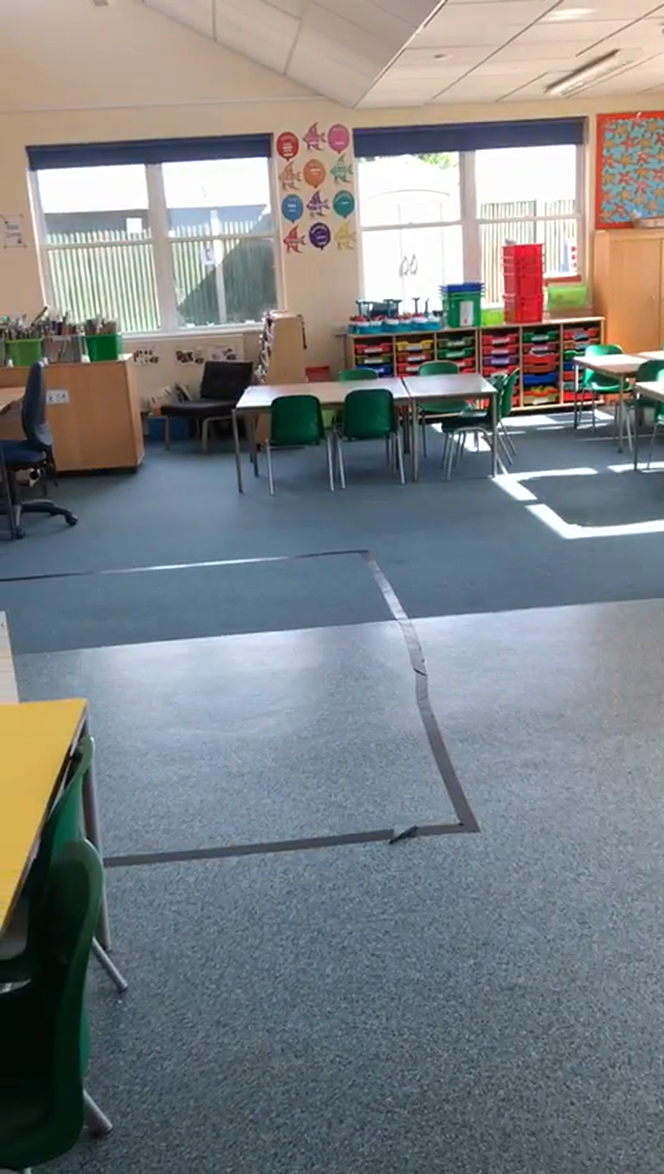 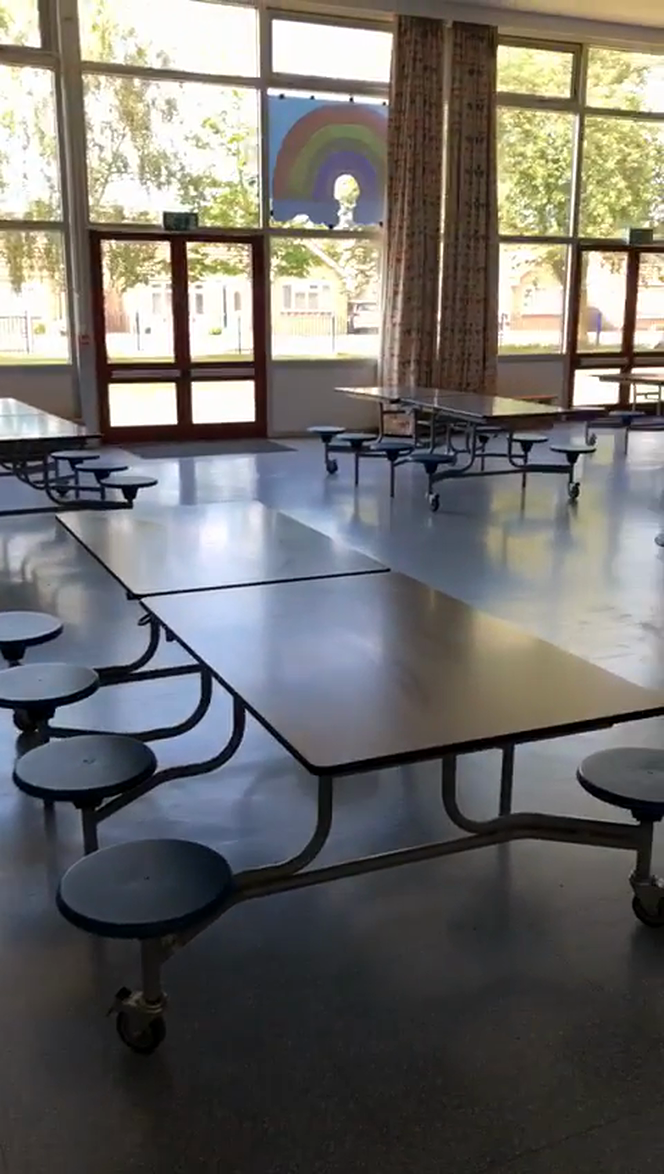 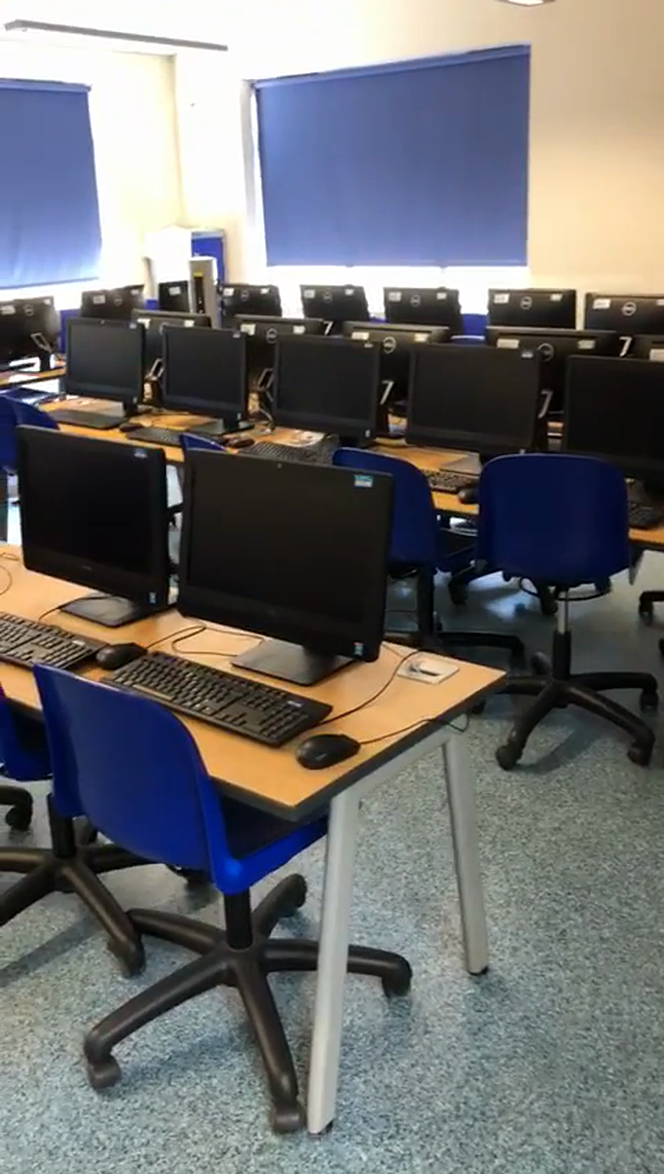 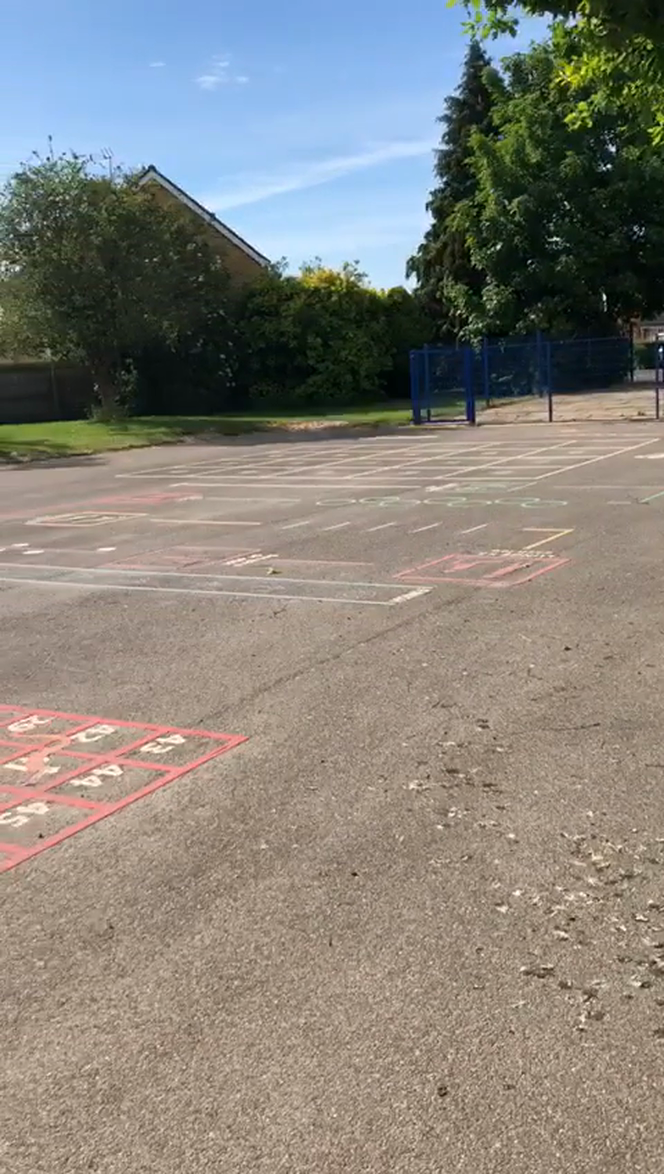 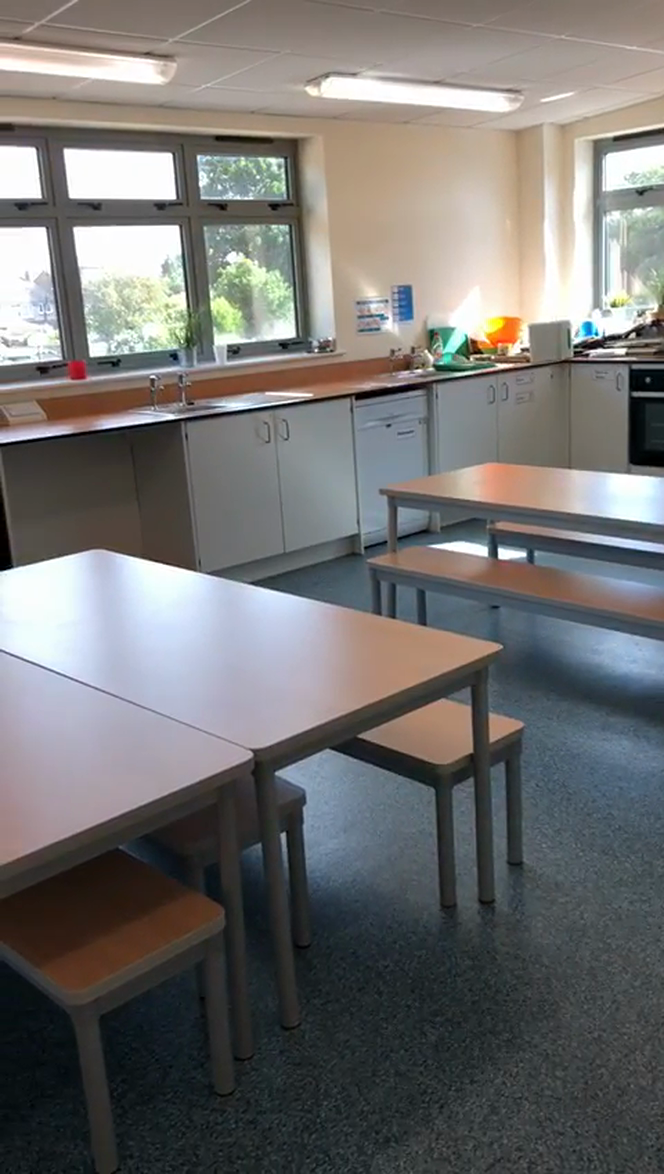 You could also think about rooms or areas that you know well, like the Early Years rooms and playground or the swimming pool.

Once you've made these little notes on adjectives, we'd like you to complete the planning sheet below, ready to write the leaflet tomorrow. You might choose to use alliteration in your sub-headings, or some really powerful adjectives to describe how fantastic our huge playground is. You can see the start of a planning sheet below, just to give you some ideas.

We go on to use the WOW Title on the front cover of the leaflet, with the 'flash phrases' around it with a drawing of the school to 'draw people in'.

Once you're done, please share your planning sheet with us on Seesaw. 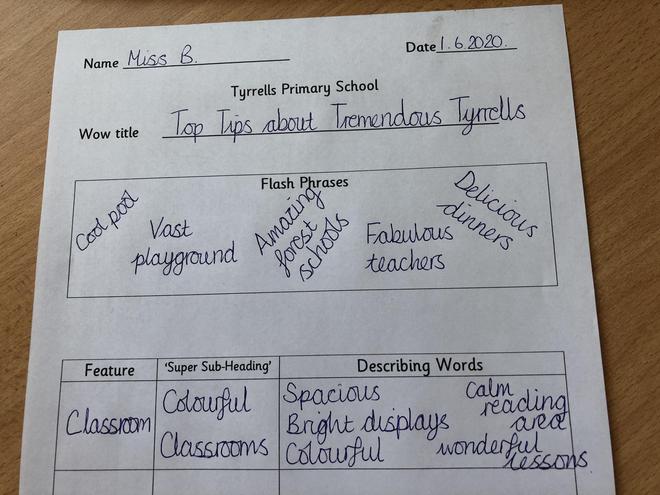 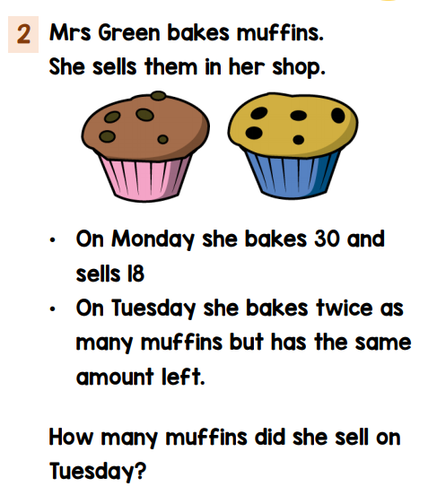 Today we are learning to share a total equally and find the number of groups.

Draw children's attention to the fact that when we are multiplying and dividing, we always work with equal groups. Explain that in the past two lessons, to divide we have been sharing equally.

Explain that there is another way to make equal groups. We can decide on a set number of objects for each group, then make groups of this size.

Ask: I want to give each teddy four pens. How many teddies can I give pens to?

Ask: How many more teddies can receive four pens?

Give one more teddy the remaining group of four pens.

Ask: How many teddies have I given four pens to?

Ask: How many groups are there? (There are three groups/teddies)

Ask: How many pens are in each group? Repeat this process with other quantities and objects, e.g. I have 15 pencils. I want to put five pencils into each pot. How many pots do I need?

Ask: There are eight buttons. I want to put two buttons in each group. How many groups will there be? 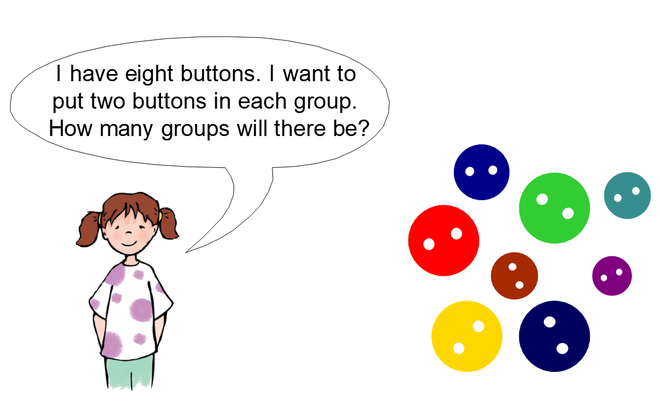 Ask children to organise them into groups of two and then count the number of groups.

Task 1 – Organising objects into equal groups of a set amount

Give children 12 counters and access to paper cake cases (please do adapt this activity using whichever resources are available!). Child turns over a card numbered 2, 3, 4, or 6 and says how many objects will be in each group. Child lays out a cake case and puts the corresponding number of counters in it. They continue to do this until all the counters have been shared equally into groups. Child counts and says the number of groups. 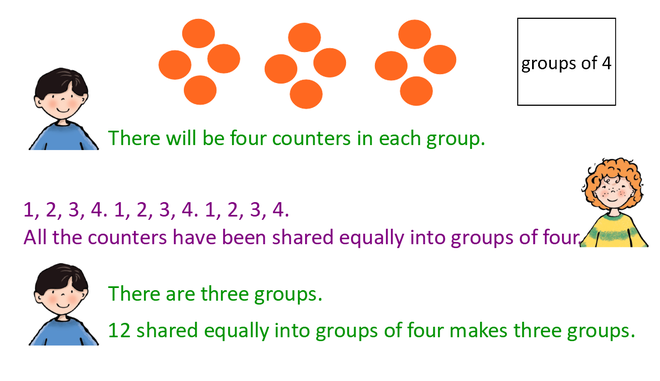 Show the image of 15 apples below. 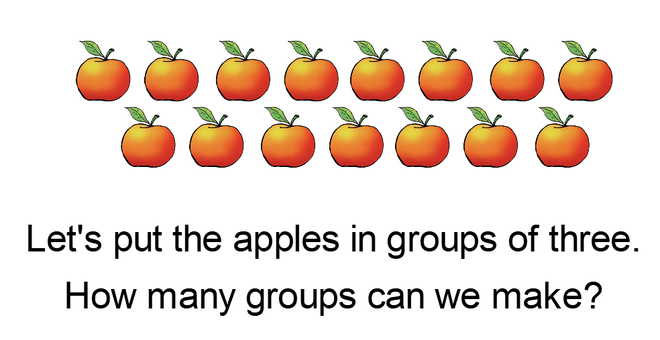 Explain that we are going to share them equally into groups of three. Use 15 cubes to represent the apples (or anything that is small and can be easily shared). Count out groups of three from the 15 cubes, and place each group on a separate paper plate as you do so.

Ask: How many groups have I made?

Put a ring around groups of three apples and then counting the number of groups shown. 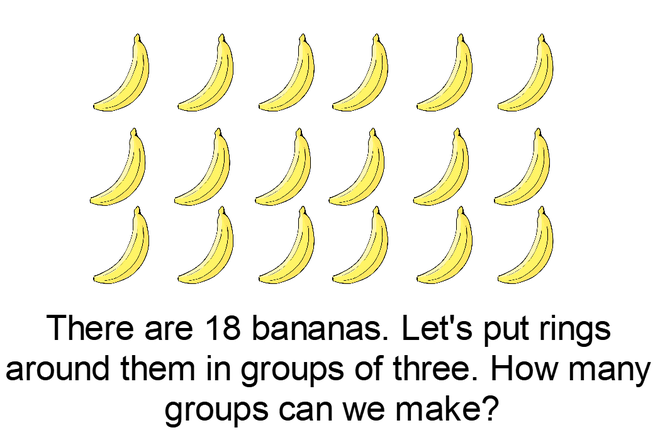 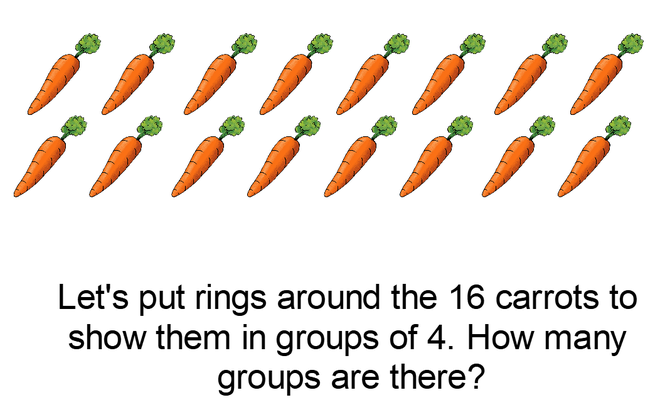 Support children's understanding if needed by completing the grouping on the first question as an example. Some children might find it helpful to have one group pre-circled for each question, as a model of how to group.

Below is a short video which explains the concept of division by grouping.
Top