Today we will be learning to spell -ing words that are split digraphs.

Explain to the children that we need to drop the ‘e’ from split digraph before adding ‘ing’. 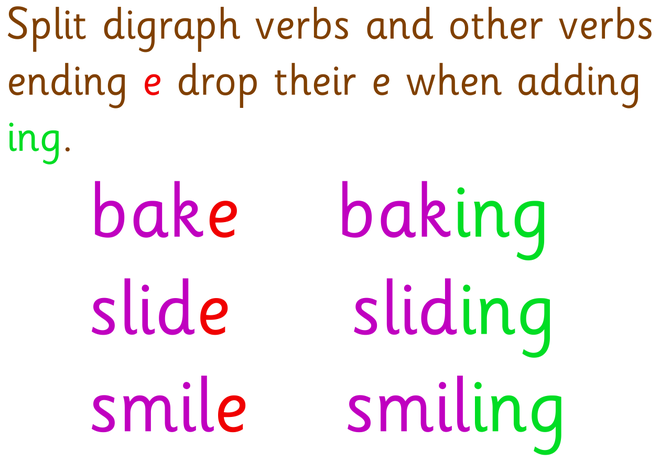 Can you match the split digraph verb to its -ing spelling using the words below? 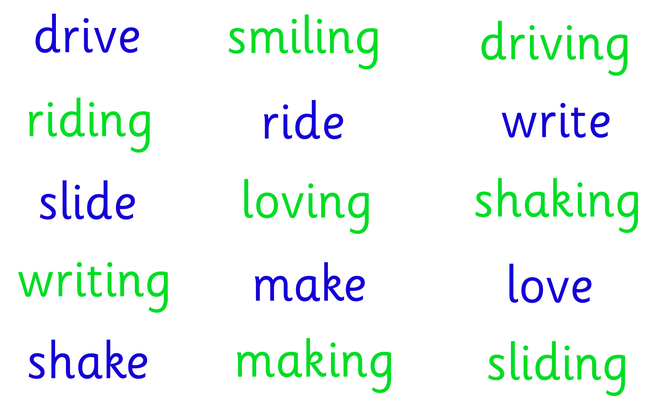 If you want more, try putting a few of these -ing words into one sentence!

Listen very carefully to the clip below of Julia Donaldson (and Malcolm) as they perform a teaser of the story 'The Scarecrow's Wedding' on BBC Sounds. 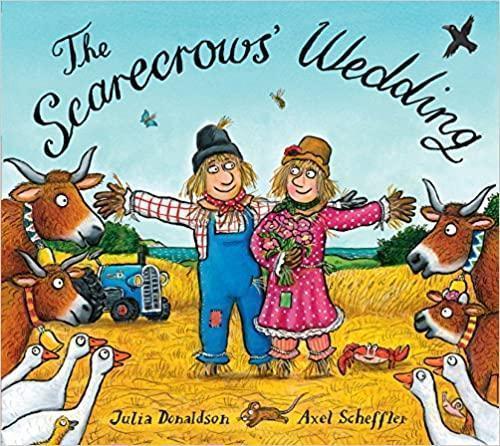 Who are the main characters in the story? What is the story setting? Which big event are they planning? Can you remember what they put on their list that they need to find? Who has helped them with the items on their list so far?

Listen again to the story so far, how many rhyming words can you hear? Write them down and compare the different spelling patterns. You might have to keep pausing the sound clip to make sure that you get them all! 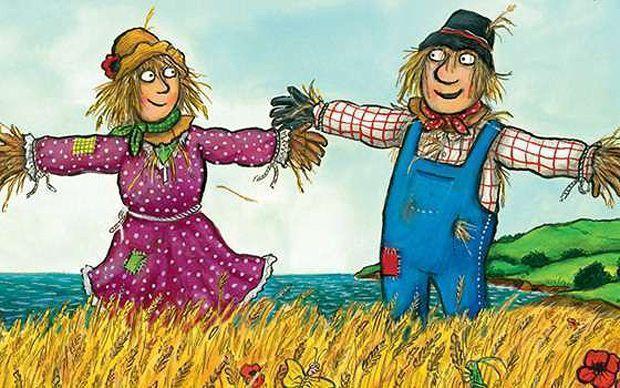 What date is your wedding going to be?

How do you scare lots of crows every day?

Write down a list of at least eight questions that you'd like to ask the happy couple. Don't forget to start each question sentence with a clear, tall capital letter and end each question with a question mark. Please send us a picture of your questions, and your rhyming words, through on Seesaw. 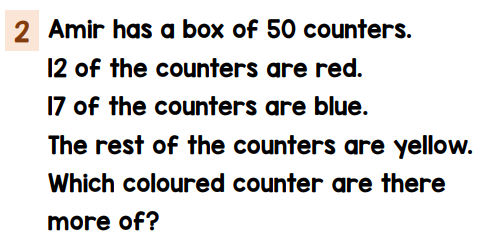 Today we are learning to compare different amounts of money

By the end of this lesson, children should be able to add coins together to find a value and compare that value with another set of coins.

Recap the value of the coins and notes that have already been introduced below. 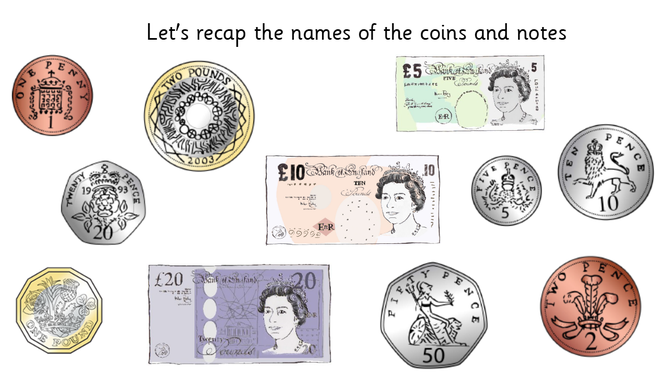 Have a money box. Explain to children that you have some penny coins and you are going to drop them in to the money box one by one. As you drop each penny coin in the money box, count in ones.

Repeat this activity, this time dropping in two pence coins.

Repeat this activity with five and ten pence coins. 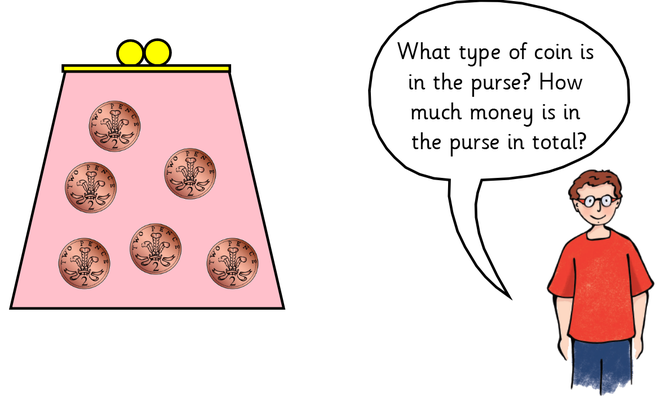 Ask:What type of coin is in the purse?

How much money is in the purse altogether?

Point to each coin and count in twos to find the total amount.

Demonstrate counting in twos using Dienes along side the two pence coins. 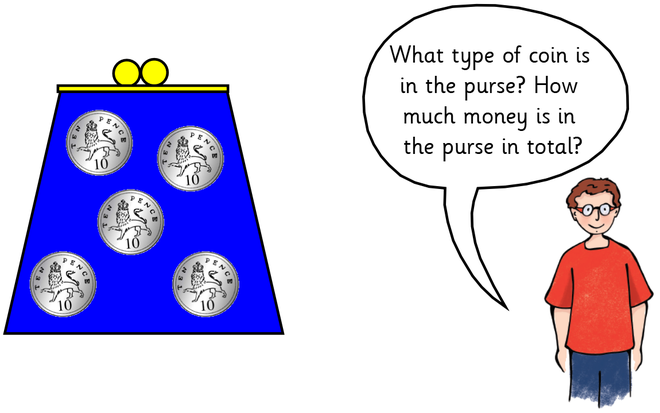 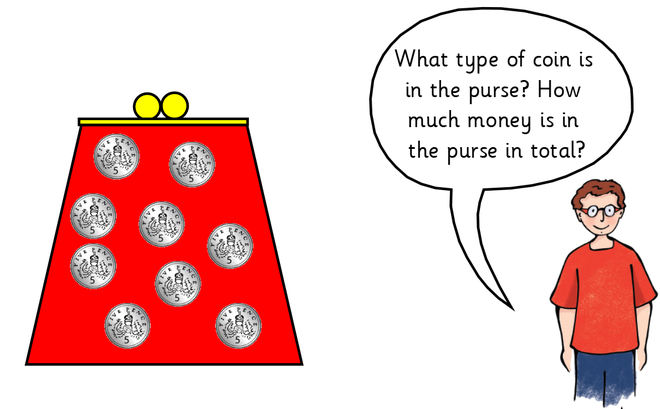 Show the below purses. 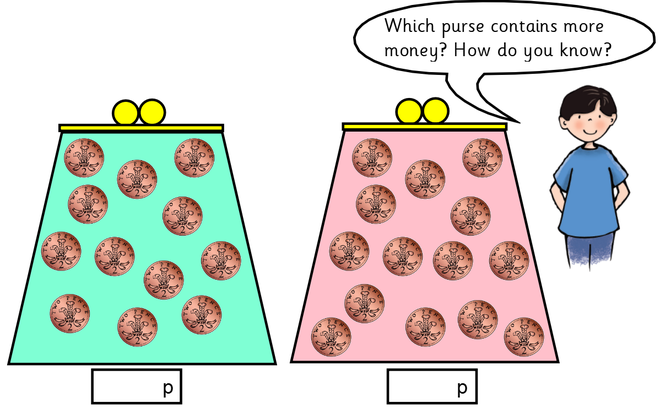 Ask: Which purse contains the most money? How do you know?

Show how to find the total amount of money in each purse. Count in twos and cross out each two pence coin as you count. 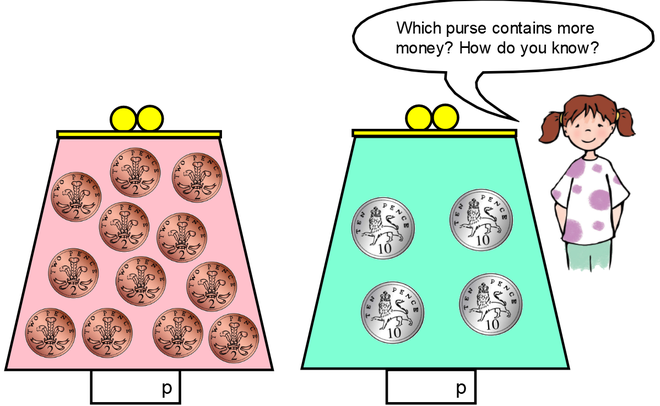 Ask: Which purse contains more money? How do you know?

**Watch out! Children may think that because the green purse contains fewer coins, it has less money**

Emphasise the different value of the coins (two pence and ten pence). Show how to find the total amount of money in each purse. Use the Dienes along side to demonstrate counting in twos for the two pence coins and counting in tens for the ten pence coins.

Now, have a go at a few of these challenges below. For each question, children to make the amount in each purse in Dienes to assist their understanding.
You could also have a play on this website below.
Top