Today have a look at the main phase 3 and phase 5 vowel graphemes below. Ask your child to say the phonemes. 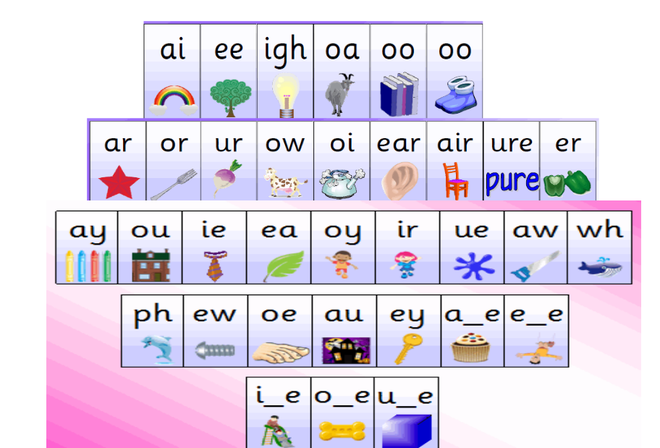 Have a go at reading the alien words below: 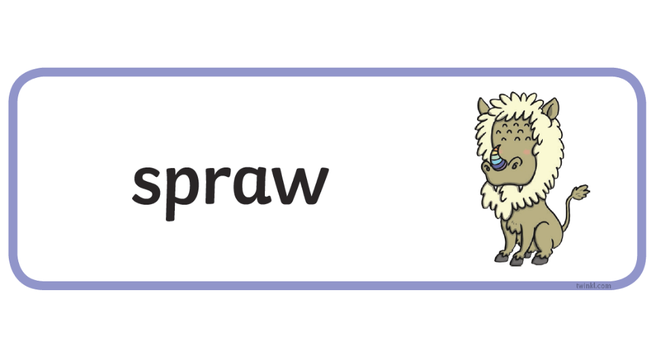 Ask your child to write down 4 words from the above alien words and play 'alien bingo' against them.

To start off this half term, we'd like you to warm up your writing brain again by writing a recount of something that you did at half term. It could have been a long walk with your family, a movie night where you stayed up late with popcorn or a sleepover on your living room floor with your brother or sister!

Watch the videos below to help you remember what a recount is.

How to write a recount

You can write your recount in your exercise book, or type it on the computer if you want to practise your keyboard skills.

Once you have finished your recount (or even while you are writing), check over your writing for all of the important Year One writing features.

Once you're happy with your finished recount, please send it over to us on Seesaw. 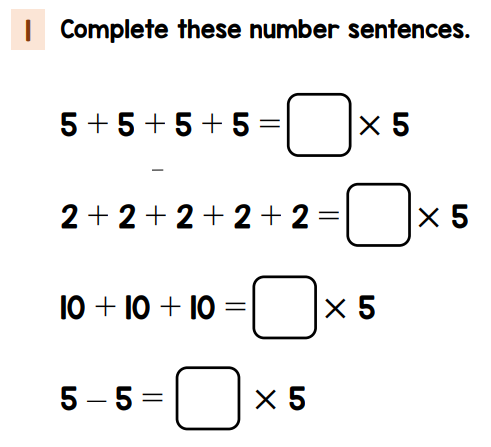 Today we are learning to share a total equally between a set number of groups.

Explain to children ‘sharing’. Give children six bananas or six objects from around the house and ask them to give one person three bananas, another person two bananas and the third person one banana. 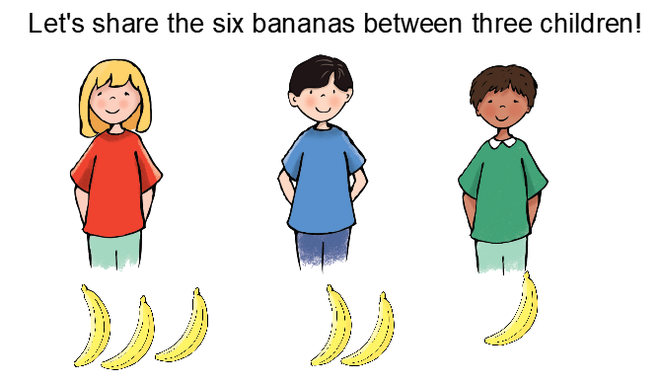 Ask: Have I shared the bananas fairly?

Take the bananas back and give one person four bananas and the other two people one banana each. 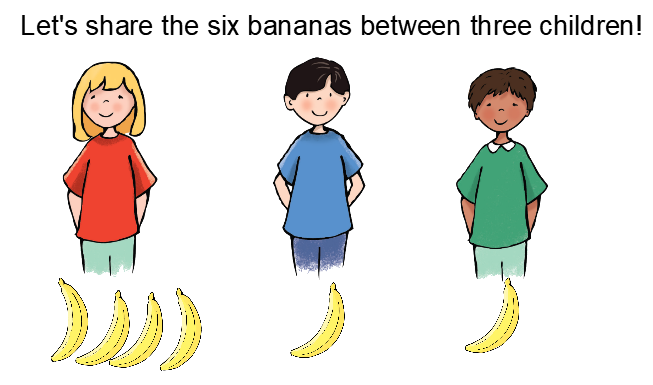 Ask: Is this fair? Why? Why not? Ask children to explain why they think it is not fair. Gather ideas from children about how to distribute the bananas fairly and give each person two bananas. 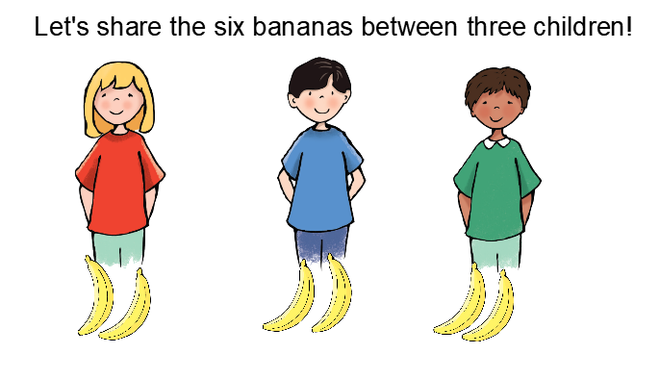 Establish that the bananas have been shared equally when each person has the same number of bananas.

Explain that in this lesson you will be sharing objects equally into different groups. Show eight apples or anything you can find around the house and four baskets.

Ask: How can we share the apples equally between the four baskets?

Children say: We need to have the same number in each basket.

Explain that when  we share fairly, we call it division. Model putting one apple in each basket and repeat this process, adding one more apple to each basket in turn until all eight apples have been distributed between the four baskets. Repeat with more examples using concrete objects, e.g. sharing ten pencils between five pencil pots, filling each pot with one pencil first, then adding another pencil until they have all been distributed. Check that children agree that it is fair, i.e. all pots have the same number of pencils. Model sharing unfairly by putting more than one object in a group, and get children to correct this. Emphasise the importance of putting one object in each group, then repeating if there are any left over.

Give children counters and paper cake cases or anything that can be used around the house to represent apples and groups. Select a card showing a pictorial representation from the document below: 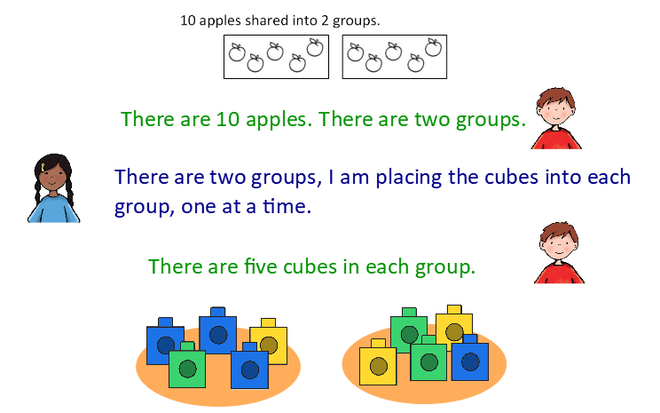 Show the image below of eight strawberries. Explain that we are going to share them equally between the two groups, which we can also call division. Invite children to lay out two paper plates. Use eight objects to represent the strawberries, ensuring children express verbally that one object represents one strawberry. Place one object at a time on each plate alternately until all the strawberries have been shared. 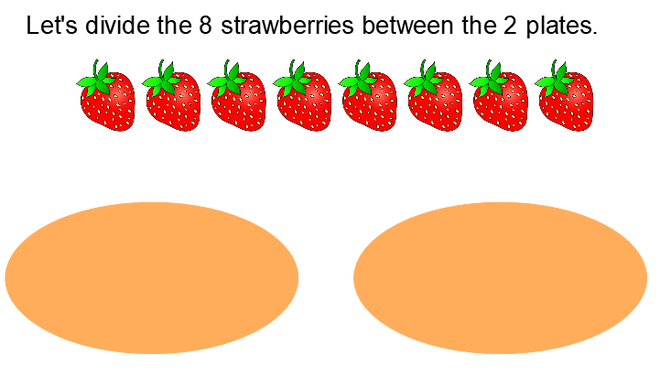 Model representing this pictorially on a part-whole model. Draw the strawberries in the ‘whole’ then one at a time share them by drawing them in the two parts, crossing out one strawberry in the ’whole’ each time. 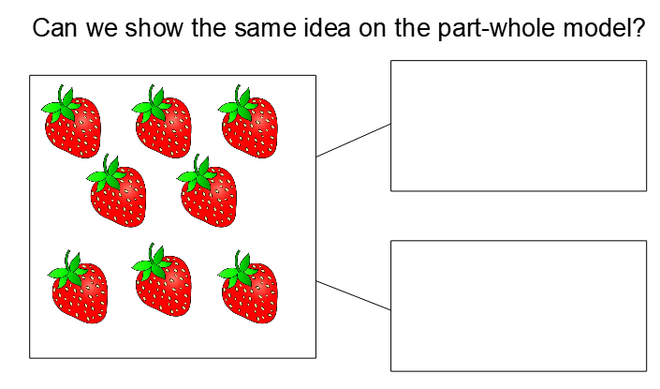 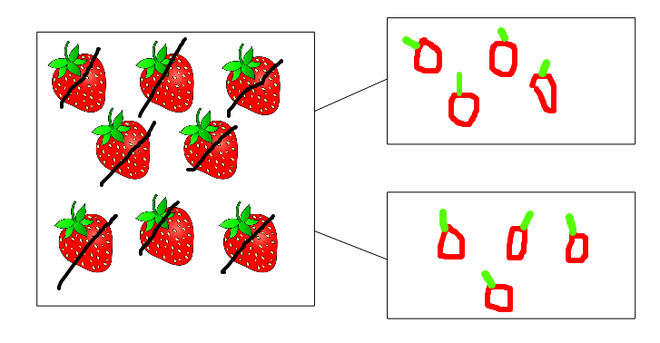 Repeat with more examples shown below. Each time model sharing objects (representing strawberries) onto paper plates, then show this pictorially on a part-whole model, drawing attention to the fact that the number of ‘parts’ is the number of groups we want to make. 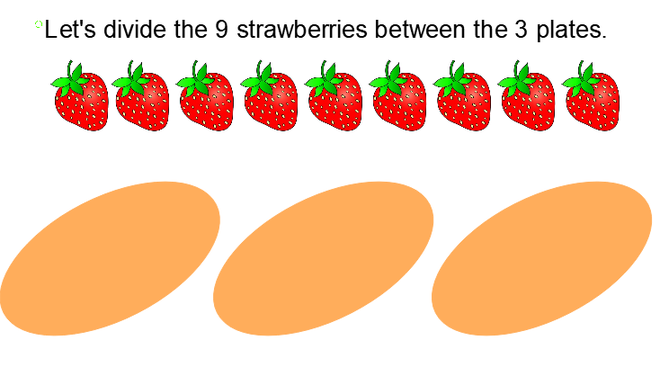 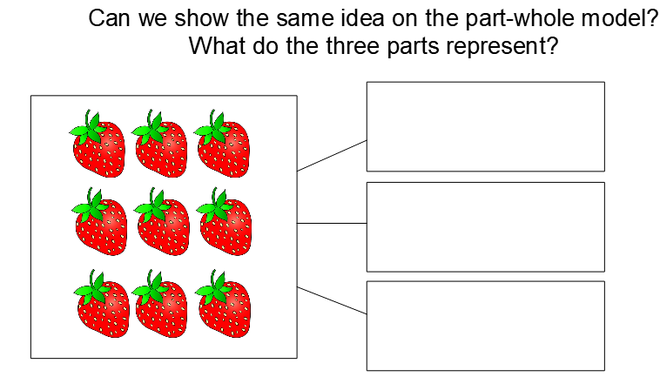 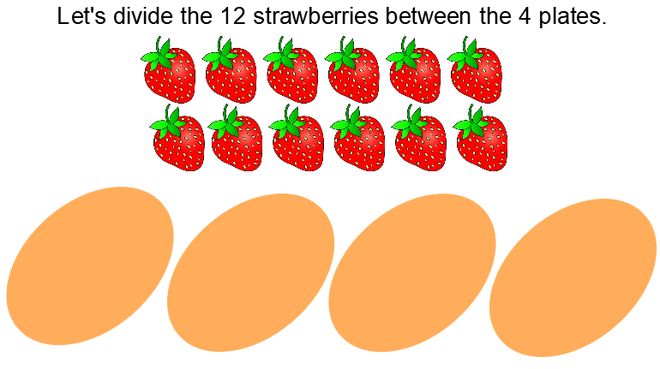 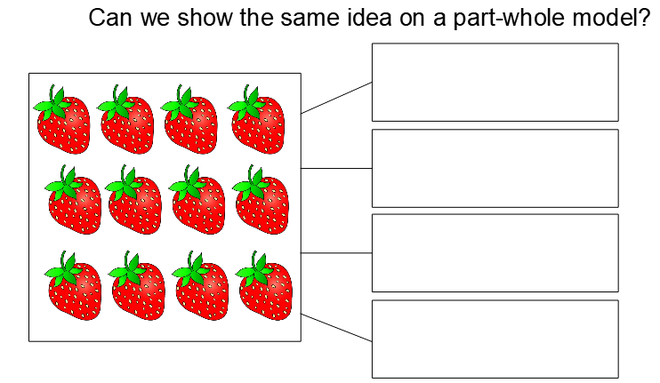 Now choose a challenge from below, can you share equally and then represent your answer in a part-whole model?